More momentum in the treatment of vascular diseases. 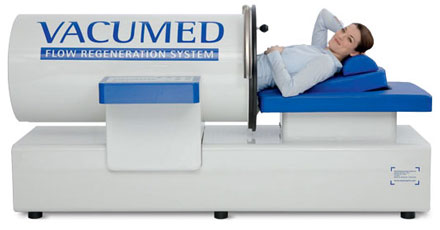 A powerful, cost-effective method for improving circulation in all stages of peripheral arterial occlusive diseases.

The innovative IVT is not only well tolerated and ingeniously easy to apply but also economically profitable with surprisingly fast results.

Intermittent vacuum therapy –IVT- applies alternating negative pressure (vacuum) and positive pressure to the lower extremities up to the abdomen. Physiologically this creates a rhythmic vascular dilation and compression and stimulates the “flow” in a natural, purely physical way.

The result is better circulation, more capillarisation and an increase in the venous and lymphatic return. The central nervous system is also stimulated. The treatment is completely pain-free independent of the disease and its stage, as it functions without compression. The patient remains totally passive. Undressing is not necessary.

The technological origin of IVT lies in the space medicine of the American NASA. In the weightlessness of the orbit the astronauts have to undergo a negative pressure treatment in an LBNPD (Lower Body Negative Pressure Device) every ten hours to avoid orthostatic complications. This is the only way to ensure sufficient blood circulation in the lower extremities in spite of a lack of gravity. The further development of the LBNPD is the VACUMED® Flow Regeneration System. The device was developed at the Institute for Space Medicine of the Germany Aerospace Centre (DLR). The main areas of use are cardio-vascular stimulation and revascularisation. IVT is also recognised as a modern, cost-effective therapy for lymph and lipo oedemas. In a different form the method is also used to boost post-traumatic or post-operative rehabilitation (VACUSPORT® device) or as pain therapy for the arms, neck and shoulders (VACUMED® A.N.S. device). High tolerance, high patient benefit and the positive effect on the profitability of the medical facility are documented.